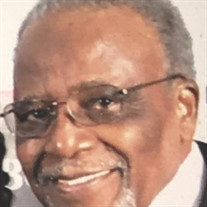 Robert Earl Jones, was born on November 13, 1929, in Cushing, Texas to proud parents L. B. Jones and Willie Verna Jones Williams. In 1951, after graduating from Lane Field High School, Robert was drafted into the United States Army during the Korean War. Serving his country proudly, he received the Korean Service Medal with two Bronze Service Stars and the United Nations Service Medal. During his service in the Army, Robert was deployed across the country and overseas. He was wounded during the Korean war and spent many months recuperating in Japan. He was honorably discharged in 1953 and continued to serve as an Army Reservist for five years. In 1953, Robert met the love of his life, Lillian Carr. Robert and Lillian married and in 1957 they moved to San Diego, California with their children. Robert worked in the private sector before taking a civilian leadership position with the United States Navy. Robert retired after 20 years of service and received numerous outstanding awards for his dedication and service to the United States government. Robert was baptized and placed membership with the 61st and Division Street Church of Christ. He was a faithful member for over 50 years and served in many capacities including leadership on the church board until his health declined. He was a devoted husband to his wife Lillian for sixty-eight years. He was a loving father, strong family patriarch and supportive of his extended family. He nurtured relationships with his family members from the youngest to the oldest and from the east to west coast. He was President and board member of the Skyline Hills Community Association for many years and later a board member for the Lalani Homeowner Association. He was an effective community advocate for over 45 years, volunteering countless hours to improve the safety and quality of life for San Diego neighborhoods. Robert is remembered for his tireless work ethic and generosity. He was a lifelong learner and taught himself to build complex financial spreadsheets on his computer after retirement. He was an avid sports fan and loyal Chargers fan for 60 years. He worked out at the local gym until he was 90 years old. On Wednesday, March 29, 2022, God in his infinite wisdom opened heavens gates and called his faithful servant home to be with Him. Robert was called from labor to receive his eternal reward. He was preceded in death by his parents, L.B Jones and Verna Willie Williams and brothers, Millard and Hubert. He leaves to cherish his memory his loving and devoted wife Lillian Jones; his daughter, Gwendolyn Amina Jones Law (Conrad Brian Law), his sons, William Donnell Jones (Cheryl Sueing-Jones) and Robert Jones; his brother L.B. Jones; seven grandchildren, Alec Williams, Lia Jones Karavokiris (Lucas), Lauren Travis, Toussaint Jones Farwell, Taylour Jones Law, Harmony Jones and Alex Jones; five great-grandchildren, Gabrielle, Mya, Isaiah, Sara Lillian and Ava Love; and a host of nieces, nephews, other relatives and friends who will mourn his passing, yet celebrate his life. In lieu of flowers, you may donate to a scholarship fund that will be established at the San Diego Foundation in his memory. The fund will benefit African American students who earn admission to college. You are invited to watch the service/ live stream (copy and paste the link below to your web browser) Church of Christ streaming link https://www.youtube.com/channel/UCTZCgCX5H41TZx-sx_OAdnA

Robert Earl Jones, was born on November 13, 1929, in Cushing, Texas to proud parents L. B. Jones and Willie Verna Jones Williams. In 1951, after graduating from Lane Field High School, Robert was drafted into the United States Army during the... View Obituary & Service Information

The family of Robert Earl Jones created this Life Tributes page to make it easy to share your memories.

Send flowers to the Jones family.