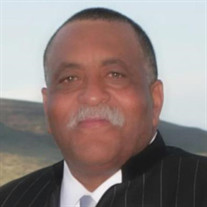 “For I know the plans I have for you, declares the Lord, plans to prosper you and not to harm you, plans to give you hope and a future.” Jeremiah 29:11 Robert L. Robinson was raised in Jacksonville, Florida and received his elementary and secondary education in the Duval County Public School System. Robert had a beautiful tenor voice and sang in his junior and senior high school choirs. During his formative years, he was greatly influenced by the activism of his father, Oscar, a local pastor, Reverend J.S. Johnson and Rutledge Pearson, his Civics teacher and president of the Jacksonville Branch of the NAACP. He participated in demonstrations during the Civil Rights Movement and was a passenger on the Freedom Train (from Florida to Washington, DC) to attend the 1963 March on Washington. Upon graduation from New Stanton Senior High School, Robert joined the military and served his country during the Vietnam War. Restless for a better life outside of the constraints of a segregated life, Robert started his trek across the country, finally settling in San Diego. In 1974, Barbara met the love of her life, Robert Robinson. They were married in 1980 and soon welcomed their precious daughter, Roberta into a family of three boys. As a youth, Robert was nurtured by an invisible web of support that included the family, community, school, and church. Paying it forward, Robert used his life experiences to become a relentless advocate for the community at large and especially youth. Over the past forty plus years, Robert has worked diligently to assist gang members, drug and alcohol abusers, and juvenile detainees to create a path to a better and more productive life. Through his work, Robert helped to reduce gang violence and change the trajectory of numerous lives. He was extremely proud of the Broadway Heights Youth Council which he and his wife, Barbara organized to provide a constructive outlet to develop their leadership skills and how to become effective community activists. Consequently, the Youth Council learned patience as they pushed for legislative changes through the City Commission to rename Weston Street to Dr. Martin Luther King, Jr. Way. Eventually, a historical, outdoor museum honoring civil and human rights leaders from around the world was installed on MLK, Jr. Way. Robert was a fierce community and civic activist and served on various boards and commissions throughout the community; always speaking out on behalf of those who were not in the room. His contributions to San Diego and his beloved community of Broadway Heights are too extensive to capture to recall in this limited space. Robert was a committed family man who loved his wife, partner and friend, Barbara who preceded him in death in August 2021. He enjoyed cooking and entertaining his neighbors and friends. The doors of his house were always open for community meetings, political forums, an intergenerational computer lab, and food distribution center. With certainty, he leaves a legacy of exemplary community stewardship. In 2018, Robert joined Bethel African Methodist Episcopal Church and became actively involved in the life of the church to include the Sunday School Adult Class, Manor Ministry Food Drive, and Mr. and Mrs. Ministry. Robert served as a Trustee and at the time of his transition he was assisting with the church plans for building a housing facility for veterans. On Saturday, October 23, 2021, at the site of the Dr. Martin Luther King, Jr. Promenade in Broadway Heights, a bust of Robert and Barbara was unveiled in recognition of their outstanding contributions to San Diego. His life, love, and legacy will be mourned by: Daughter: Roberta. Sons: Glenn (Merely), Jim (Ellen), and David (Alissa). Grandchildren: Rachel (Daniel), Matthew, David (Olivia), Barbara, Elisa, Kelly, and Cameron. Great-grandchildren: Rowan, Jackson, Caleb, Dresden, and Evelyn. Sisters: Violet (Lewis) and Charlene. Brothers-in-law: George and Ross (Barbara). Uncles: Vincent (Joyce) and Walter (Cassie). Aunts: Minor, Gladys, and Lucretia. Nieces and Nephews: Lara (David), Michael (Brenda), Stacy, George, Brian F., Eric (Najiy), Eric Jr., Iesha, Brian P., Eric P., Larry (Crystal) Roger, II (Angela), Regina, La’Tanya (Kendall), Rodney (Sabrina), Bolsey, Cornelia (Deshawn), Mark, Rueben and Maria. Cousins: Karen (Albert, Sr.) and Albert, Jr. (Melissa).

&#8220;For I know the plans I have for you, declares the Lord, plans to prosper you and not to harm you, plans to give you hope and a future.&#8221; Jeremiah 29:11 Robert L. Robinson was raised in Jacksonville, Florida and received his elementary... View Obituary & Service Information

The family of Robert Lee Robinson created this Life Tributes page to make it easy to share your memories.

“For I know the plans I have for you, declares the Lord,
plans...

Send flowers to the Robinson family.