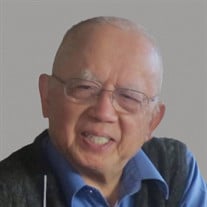 Romeo Azares Quini, M.D., husband of the late Milagros Yuching Quini, passed away at the age of 89, on Tuesday, October 5, 2021, in San Diego, CA. Born in Indang, Cavite, in the Philippines on May 1, 1932, Romie was the second of five sons to the late Zacarias Ogot Quiniquini and Paulina del Rosario Azares Quiniquini. His father had always emphasized the importance of an education, saying that nobody could ever take that away from him. That particular lesson was a guiding principle throughout Romeo’s life, taking him from rural Philippines to Chicago to San Diego County. Romeo finished his medical degree from University of Santo Tomas Faculty of Medicine and Surgery in 1956. He pursued further training in the US, specializing in Thoracic and General Surgery, then served as instructor and Chief Resident at Mercy Hospital-Stritch Loyola Medical School in Chicago, IL. It was in Chicago that he met his future wife, Mila, and started a family. After moving to San Diego in 1968, he and Mila opened a private practice in North Park. They maintained the practice, with additional offices, until retirement in 1999. Early in their careers, the husband and wife team were two of only four practicing physicians who had immigrated from the Philippines to the San Diego area. They made it a point to support their homeland and newfound communities through their profession. Romeo's volunteer efforts focused on the medically underserved areas of San Diego, first with the American Indian Health Clinic, and then in a makeshift Friday night clinic in a downtown barbershop. Those efforts were the seeds for the Operation Samahan Clinic, founded by Romie and his compatriots. Under their leadership, the clinic provided health screening and education for low-income families and individuals in the pan-Asian community, and began its expansion to its current operation at seven sites. He was one of the founders of Philippine Medical Association (PMA) in 1979; both he and Mila were active members throughout their careers. While practicing as a solo surgical specialist in San Diego, Romeo became proficient in acupuncture with personal teachings from an original Chinese Acupuncturist. He pioneered the use of acupuncture as an anesthetic. He further pursued the studies and practice of other modalities of alternative medicine, and was a proponent of application of laser energy at acupuncture points to control pain. After retirement, he devoted his time to integrated medicine, and shared his knowledge and skills via published books and lectures. Additionally, he spent several weeks a year as a surgical volunteer in remote areas in the Philippines, continuing with these missions through 2018. Romeo was known for his generosity, always wanting to help others get a leg up in their world. He instilled the same respect and love for education in his five children as his father had done for him. He enriched his spirit as a longtime parishioner of St. Vincent Church and member of the Knights of Columbus. He enjoyed making people laugh with his stories and jokes. Romeo fed his curiosity for the world with trips throughout the US with the entire family, and later, with Mila. Not least of all, he relished his ice cream treats, always having something on hand to share with guests who wanted to indulge. Romeo is survived by his daughter Marilou (Peter Pitsker) of Huntington Beach; son Roy (Marjatta) of Alexandria, VA; daughter Maricris (Virgil Enriquez) of Poway; and son Ronald (Anna) of San Diego, as well as 11 grandchildren: Donovan, Tessa Rae, Ike, Aaron, Maxwell, Hannah, Romeo, Ava, Francesca, Ella, and Miles. He is also survived by his brothers, Ernesto Quini and Rosendo Quiniquini, of Northern California, along with 15 nieces, nephews and their families. He was predeceased by his parents, brothers Eddie and Leo, his wife Milagros, daughter, Marites, and nephew Erwin. Family and Friends are welcome to attend a vigil, Monday, October 25th, from 5:00-9:00PM at Greenwood Mortuary, Salli Lynn Chapel, 4300 Imperial Avenue, San Diego 92113. A Catholic Mass will be celebrated on Tuesday, October 26th, at 10:00AM at St. Gregory the Great Catholic Church, 11451 Blue Cypress Drive, San Diego 92131. The family requests that regardless of vaccination status, all attendees wear a mask and respect social distancing. In lieu of flowers, donations in Romeo’s name may be made to: The Marites Quini Girl of the Year Scholarship Award Francis Parker School 6501 Linda Vista Road San Diego, CA 92111 or Operation Samahan Incorporated Attn: Evelyn F. Garcia 1428 Highland Avenue National City, CA 91950

Romeo Azares Quini, M.D., husband of the late Milagros Yuching Quini, passed away at the age of 89, on Tuesday, October 5, 2021, in San Diego, CA. Born in Indang, Cavite, in the Philippines on May 1, 1932, Romie was the second of five sons... View Obituary & Service Information

The family of Romeo Azares Quini created this Life Tributes page to make it easy to share your memories.

Send flowers to the Quini family.