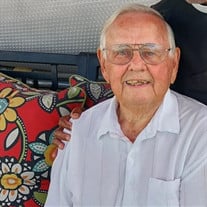 Rudolph (Rudy) Krautwald Jr. was born in Sommerville, New Jersey on June 14th 1931, the second of 4 children to Rudolph Krautwald Sr. and Ruby Krautwald. He grew up as a diligent worker on his family’s farm where he learned to plow fields, milk cows and fix just about anything (as many of his friends and family would attest). He worked on the farm until 1949 when he joined the United States Air Force. After boot camp he was stationed in Frankfurt and Erding, Germany; where after a year of duty he met his future wife Ottilie. After his honorable discharge in 1954, Rudy returned to New Jersey where he married Ottilie. He then began his lifelong career as an electrical technician. His great reputation as a hard worker took him all across the country; San Jose, Hawaii, and his favorite, Fairbanks, Alaska. He eventually settled in San Diego, California in 1969 with his wife Ottilie and daughter Maria. He worked at NOSC Point Loma for 25 years until his retirement, he truly appreciated working for the Navy. Outside of work, Rudy enjoyed the outdoors. He especially loved his annual Alaskan fishing trip for the salmon run with his friends and just fishing anywhere in San Diego with his grandson (Rolan). He was also a huge sports fan, watching all his favorite teams: Patrick Henry High School athletics (where he volunteered as a grounds keeper), SDSU Football, the Chargers (before they moved to LA), and of course the Padres. Rudy was always known for being amiable, knowledgeable, and sometimes even a bit stubborn; but took great pride in his family, friends, career and conversations with any acquaintance. He will be greatly missed by Maria, Don and Rolan Desmarais (Daughter, Son In-Law and Grandson) as well as so many other friends and family members. “You may be the most talented, but I’ll out work anyone.” – Rudy Krautwald

Rudolph (Rudy) Krautwald Jr. was born in Sommerville, New Jersey on June 14th 1931, the second of 4 children to Rudolph Krautwald Sr. and Ruby Krautwald. He grew up as a diligent worker on his family&#8217;s farm where he learned to plow fields,... View Obituary & Service Information

In loving memory of Rudolph A. Krautwald

Send flowers to the Krautwald family.