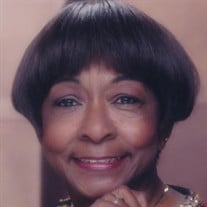 “Lorraine” Ruth “Lorraine” Goodwin, affectionately known as Rene or Miss Lorraine to her family and friends, was born June 1, 1931 in Giddings Texas to Theodore and Alethia Nunn. The family moved to Corpus Christi, Texas for work where she attended St. Matthews Baptist Church where she accepted Christ and was baptized at an early age. The family moved to California in the 1940’s where she met and married Nathaniel Goodwin. Together they celebrated over 60 years of marriage and raised their children in the community of East San Diego where she served as PTA president at her children’s school and was also a Girl Scout troop Leader. Lorraine was active in many community-based events and was widely known and well respected. She was known for her advocacy for young people and could be counted on to provide direction and wise counsel. During Lorraine’s more than 50 years with the San Diego Unified School District she taught at Kit Carson Elementary and retired from Martin Luther King Jr. Elementary School Lorraine was a member of SDTA (San Diego Teachers Association) CTA (California Teachers Association), and NEA (National Education Association) where she received various awards throughout the years. Locally, she was recognized as a Who’s Who in Education in the African American community Her social affiliations included, among others, The Colonial Belles, comprised of women that were educated in the South. This organization provided scholarships to young African American men. Lorraine loved life and loved to travel. During her lifetime she travelled throughout the United States, Mexico, the Caribbean, and Africa. Lorraine will be remembered for her style, class and Thanksgiving and Christmas dinners. She enjoyed playing Bid Whist, (and she could play with the best) Pokeno, Scrabble and other board games while spending time with family and friends. After her health began to fail, she was lovingly received into the home of Pam and Harold Tolson her daughter and son-in-law where she remained until her passing. Lorraine was preceded in death by her husband Nathaniel Goodwin, her sister Esther Alexander and son in law Johnny McKinley Lorraine leaves to cherish her memory her brother-in-law Freddie Alexander, children William Jackson (Marilyn), Helen McKinley, Philip Goodwin (Sheila), Pamela Tolson (Harold), Anthony Goodwin (Sandy), and Angela Sims (JD). 11 Grandchildren; 15 great grandchildren and 3 great-great grandchildren along with nieces, nephews, cousins and a host of friends.

The family of Ruth L. Goodwin created this Life Tributes page to make it easy to share your memories.

Send flowers to the Goodwin family.