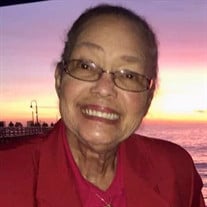 Born Sandra Patricia Hicks in Merrick, Long Island, New York in 1941, the second of two children born to the late Howard G. and Margaret E. (Hamilton) Hicks, Sandra grew up in the Village of Freeport, Long Island, New York. As a child, Sandi as she always enjoyed being called, was quite the tomboy. Her main playmates were her brother the late LTC. Howard G. Hicks, Jr. (Ret.), Raymond H. Campbell, and three boys who lived across the street. Sandra climbed trees, played baseball, field hockey, football, and other sports. This is of no surprise to those that know you would always find Sandra watching college and pro-football every weekend and Monday and Thursday nights. Sandra’s love of sports gave her the confidence and competitiveness to excel in school in academics and athletics where, in her freshman year, she was selected for her schools all-star team, and in her junior year, she was awarded the coveted Gold Key Award, an honor typically reserved for senior girls. Sandra attended the same schools her father and scores of relatives attended including Freeport High School, graduating in the class of 1958. Post high school, Sandi’s first job was with Doubleday Book Company in Garden City, New York. She enjoyed having her own desk and supervising summer interns. Sandra soon realized she was not only intelligent; she was tall, slender, and beautiful, so she enrolled in the Ophelia DeVore School of Charm. This led to a brief professional modeling career, including appearing in Jet Magazine twice, and being a popular model in the local fashion circuit. Sandi soon embarked into her next life journey: motherhood, marriage, and moving. In the late 1960’s, Sandi’s parents moved to San Diego, California. Soon thereafter, due to job relocation of her then husband, William Jackson, Sandra along with children Billy (William) and Lia moved to San Diego. The couple later divorced and Sandra, Billy, and Lia lived with her parents.. Sandi helped her father run one of his café’s where she met and later married James E. Jackson in 1973, and were married till his passing in 2009. To this marriage two daughters were born, Jessica and Patricia. It was when Jessica was started school that Sandra started the journey to became a parent volunteer, which led to becoming a teacher’s aide. Sandra was elected school site council president then advanced to the District Advisory Committee (DAC) where she was the first woman elected to serve as DAC President. Sandra was involved in an after-school program and encouraged by her supervisor to get credentialed, so she went back to school. She earned her A.A. Early Childhood Education from San Diego City College, and later attended Azusa-Pacific and Ashford University obtaining her B.A. in Organizational Management. Sandra worked as a regular teacher in the San Diego Unified School district until 2003, when she “retired,” then substituted until 2013, when she fully retired. Sandra journey entered its next phase when she became a member of the Lambda Kappa Mu sorority, and she thoroughly enjoyed the sisterhood of her caring sorority sister and the work they accomplished. In 2015, until she was no longer able to do so, Sandra was a diligent volunteer at the San Diego Fourth District George Steven’s Senior Resource Center and actively participated in the Fourth District Advisory Committee, SWAG (Single Widowed Adult Group), and Glide and Stride exercise groups. Sandra was an active community member, recognized for dedicating over thirteen hundred hours of volunteer service to Senior Volunteers in Action (SVA) and being a voting poll precinct captain for many years. In 2019, Sandra received several accolades being recognized by then San Diego Mayor, Kevin Falconer for community support; by current CA Secretary of State (then State Assemblywoman 79th District) Shirley Weber PhD., State Senator Toni Atkins, (39th District), and San Diego Councilmember Monica Montgomery (4th District) with a Special Commendation on being recognized by the Delta Sigma Theta Sorority, Inc. 2019 Breakfast for MiLady “A Tribute to Mothers.” Throughout all of this, Sandra enjoyed the love of travel with family and friends. It may have been her trip to Whistler, B.C. atop the Blackcomb Glacier, visiting art colonies in Taos, NM, cruising the Mediterranean, stopping in Corfu, Rome, or her stay in Barcelona. Or, it may have been the Jamaica trip where she rode and kissed a dolphin kissed, or sipping cool libations in a Playa Del Carmen pool? No matter where, Sandra enjoyed all with family and friends. Sandra was a devoted daughter, sister, wife, mother, aunt, cousin, and friend. Whatever she did, she did with a smile, kind words, and class. No wonder the family nick-named her “Saint Sandi.” Sandra Jackson peacefully passed away from this life at her home surrounded by her four children and caretakers the evening of Wednesday, December 1, 2021, after a long, fierce battle with pancreatic cancer. She is deeply missed by all who knew here. Sandra was preceded in death by her grandson, Daniel Akins. She leaves to cherish her memory devoted son William Jackson; daughters Lia Jackson (Russ) Penty, Jessica Martinez, and Patricia Gutierrez; grandchildren, Louisa Gutierrez, Serena Gutierrez, and Emmanuel Martinez; sister-in-law Edie Grice; godchild, Helena Simmons-Larry, childhood friend, Frances McDaniels, and devoted Hicks, Jackson, Ferrell-Coley, Harris, and Campbell families, and a host of other devoted family members, loving sorors and dear friends.

The family of Sandra H. Jackson created this Life Tributes page to make it easy to share your memories.

Send flowers to the Jackson family.