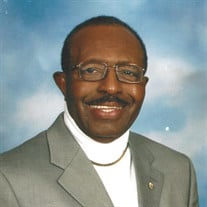 EULOGY Stanley James Young In Loving Memory of Stanley James Young a beloved husband, father, grandfather, great-grandfather, great-great grandfather, brother and uncle who passed away on May 6, 2022 at age 87. He was born on July 23, 1934, he was one of nine children born to Claude and Marion Young. Stanley James Young was born in Rockford, Alabama on a Sharecroppers farm. The family moved to Mississippi and lived there until early 1939 and then his parents Claude and Marion Young moved to Detroit, Michigan in late 1939. Stanley and his two sisters Delores and Sylvia stayed with family in Mississippi until he and his two sisters traveled to Detroit, Michigan in 1941. Stanley was baptized Catholic at an early age and was a Parishioner at St. Rita’s Church since 1965. He attended Higginbotham Elementary and Munford High School where he graduated in 1953. He continued his education attending Highland Park Jr. College until 1954. Stanley joined the United States Navy in 1955, he sailed on numerous U.S. Naval Ships including tours of duty in Korea, Vietnam and the Middle East. He retired from the United States Navy in 1974. He met the love of his life Louise McNeill and after a few visits he asked her to be his life partner and mother of his children. Louise accepted and on January 31, 1959, Stanley and Louise were united in Holy Matrimony. In 1965 Stanley relocated his young family to San Diego, California, to this union they were blessed with five children Cynthia, Andre, Cheryl, Kimberly and Rhonda. After retiring from the Navy in 1974, Stanley was employed by UCSD for 25 years where he retired as an Operating Engineer, then retired again after working part-time at Naval Station 32nd Street. Stanley was active in the community including St. Rita’s Men’s Club, he served two terms as Knights of Columbus #2891 Grand Knight, served one term as Grand Commander of Alhambra Ali Caravan #134, he served as an Eucharistic Minister at St. Rita’s Church from 1987 until he relieved himself from those duties because of the Covid-19 Pandemic. On Friday, May 6, 2022, after a courageous battle with Prostate Cancer, Stanley Young was called home. He leaves to cherish his memories five loving children Cynthia (Cleo) Thompson, Andre Young, Cheryl Stafford, Kimberly (Ephraim) Lee, and Rhonda (Jason) Baker. Thirteen Grandchildren, Craig Thompson (deceased), Candace Kelley, Christina Wolfe, Andrea Young, Christopher Young, Teresa Young, Cody Stafford, Jasmine Brantley, Jason Baker, Jr., Timothy Brantley, Stanley Young, Briana Baker and Savant Lee. 10 Great-Grandchildren, and one Great-great Grand Child. Four siblings Phyllis Doby, Audrey Ginn, Loretta Hodge, Lawrence Young and a host of nieces, nephews, cousins, sisters and brothers of each fraternal order and friends.

The family of Mr. Stanley James Young created this Life Tributes page to make it easy to share your memories.


In Loving Memory of Stanley James...

Send flowers to the Young family.