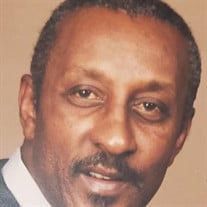 Wiley Lane II was born on August 16th, 1936, to Willie Lane Sr. and Sarah Peterson Lane in Tuskegee Alabama. He was the fifth child of six all of whom have preceded him in death. He was introduced to God at an early age and served and believed until his passing listening to gospel music peacefully at home. In his high school years, he played Basketball, Football, and Baseball, but it was in Track and Field that he was awarded a scholarship to FAMU where he won many awards for his feats in Cross Country. He was drafted into the Army in 1961 where it changed his life as he fought in the Viet Nam war as a sharpshooter, and as an aircraft mechanic. He served at Fort Bragg and Fort Benning, Fort Sill, and Fort Lewis in Tacoma Washington. He reached the rank of Staff Sergeant before he was honorably discharged and made his home in San Diego California. He met his wife Evelyn while she was in the 9th grade and became friends, and he always remained close until they started to date in their junior year of college. They were married on February 8th, 1963, and to this union they were blessed to raise 3 wonderful children in San Diego. He leaves behind his wife Evelyn of 59 years of wedded bliss. He was a great husband and father. Upon his release from the military, he found work at General Dynamics/ Convair, then with North Island Naval Air Base as an Aircraft Mechanic, and with North Island he was able to travel the world through their Field Services department, where he retired. His second retirement came after working for Kaiser Permanete in the security department. His favorite past time was fishing, and he shared it with his sons, grandchildren and any of the neighborhood children willing to learn. His second love was Golfing until he was no longer physically able to play. He loved watching football, and basketball on the television especially the San Diego Chargers, and the Los Angeles Clippers. God called Wiley into His heavenly presence on March 11, 2022. He is survived by his loving family; Wife Evelyn R. Lane, daughter Sonja Lane-West and husband Daniel West, his sons Wiley Lane III and his wife Beverly, Marvin Lane and his wife Anthereca. His grandchildren Shamara Lane, Brandon West, Tyler Preyer, Jared Lane, Bryanna West, James Lane, Bryce West and LaShelle Lane. His great grandchildren Robin Preyer, Laila West, Reagan Preyer, Ezekiel West, Remy Preyer. He also leaves behind to cherish his memories his nieces, nephews and cousins and friends. You are invited to contribute to the Christ United Presbyterian Church Deacons in lieu of flowers. The Deacons function in the life of the church as a friend to the friendless. Please submit donations to the church web address by using the donation button on their website. WWW.christunitedds.org

Wiley Lane II was born on August 16th, 1936, to Willie Lane Sr. and Sarah Peterson Lane in Tuskegee Alabama. He was the fifth child of six all of whom have preceded him in death. He was introduced to God at an early age and served and believed... View Obituary & Service Information

The family of Wiley Lane II created this Life Tributes page to make it easy to share your memories.

Send flowers to the Lane family.