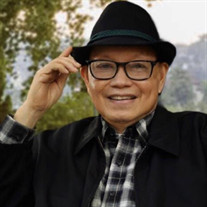 Tombstones indicate the date of a person&#8217;s birth, the day of first breath, and the date of death, the day of last breath. But it is the small dash between these two dates that make a difference to family, friends, and everyone else whose... View Obituary & Service Information

The family of Wilfredo Daffon Dirilo created this Life Tributes page to make it easy to share your memories.

Tombstones indicate the date of a person’s birth, the day of...

Send flowers to the Dirilo family.