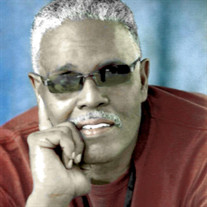 William Clarence Bell Jr. was born on October 20, 1952 in San Diego California to the Union of William Clarence. Bell, Sr (deceased) and Gertrude Mills Bell (deceased). William spent his childhood in the Skyline neighborhood in San Diego, CA. Upon high school graduation William entered the U.S. Army, after being discharged he went on to pursue a career as Customer Relations Manager. San Diego is where he met and married his lovely wife Sharon King-Bell (deceased). One thing that he was committed to was love of FAMILY and loyalty of FRIENDSHIPS. We could always look forward to his big smile and laughter at family gatherings. He was the family jokester. He was known to always greet everyone with a smile and would leave a conversation or visit with “LOVE YA.” His hobbies were photography, and flying his Drones, taking pictures of various landmarks throughout San Diego, and surrounding cities. William (CB) always had the biggest desire to visit South Africa, THE MOTHERLAND as he called it, he was able to make that dream come true twice, 2019, and 2020. Upon his return the sheer excitement of varies places he visited and the gleam in his eyes, told the full story, he ensured he left us with a lifetime of memories, and keepsakes with his photos He was preceded in death by his wife Sharon King-Bell, and parents William and Gertrude Bell. He is survived by his siblings: Diane Mills-Wade, (Jacksonville, FL), Pamela Bell (San Diego, CA), Deborah Bell (Las Vegas, NV) Thomas Bell (Cynthia), (Temecula, CA), Francine Bell Terrell (Las Vegas, NV), and Terry Smith (San Diego, CA) and 14 nieces, and nephews 20 great nieces, and nephews, and 3 great-great nieces and nephews, Cousins Beverly Hawkins, Anne McGhee and many friends including his best friend Frank Rogers... William (CB) was a lifetime resident of San Diego, California, and loved by many. William had so much goodness, and the capacity to bring a smile and happiness to others, the world is a lesser place without him. Brother, May your spirit soar in freedom, may you find the peace you search for. You have no more need for strength, God got you now. Knowing that the music of the angels will be the sweet sound you hear. I will wear your memory proudly, my brother and my true friend. May our LOVE for you reach HEAVEN, until we meet again. We love you forever and always! IN MEMORY OF WILLIAM CLARENCE BELL, JR. OCTOBER 20, 1952 – APRIL 30, 2021

The family of William Bell created this Life Tributes page to make it easy to share your memories.

Send flowers to the Bell family.