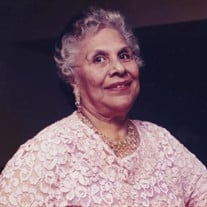 Angelita “Angie” Chacon Parents Name: Feliciano Collaso, Julia (Aguilar) Collaso Maiden Name: Collaso Resided: San Diego, California Born: January 10, 1925 Passed: May 21st, 2021 After aging gracefully to the age of 96 years old, Angelita Chacon passed away on May 21st, 2021 at home in her sleep. She leaves behind her son David W. Chacon, daughter Yolanda Annette Chacon-Beniquez. Grandchildren; Gina (Chacon) Springer, Olivia Beniquez, Amelia (Beniquez) Munoz, Emilio Beniquez, Angelina Beniquez. Great Grandchildren; Hymie Payne, Vincent Preciado, Samantha Preciado, Collin Springer, Noah Arellanes, Alexis Arellanes, Cruz Beniquez. Angelita Chacon was born on January 10th, 1925 in San Diego, California to Feliciano Collaso and Julia (Aguilar) Collaso and was the second oldest in a family of 11 children. She attended Washington Elementary, Roosevelt Middle School and San Diego High School. Angelita left school to work full time forgoing her senior year at San Diego High School. In 1943, a day after she turned 18, she signed up to work at Convair and was one of the original Rosie the Riveters working on aircrafts during World War II. On June 23, 1946, she married David Chacon, her high school sweetheart. The two married upon David's return from Navy service on the USS Tennessee in Pearl Harbor. In 1957, along with 4 other families, they formed a folklorico club which they named "Club La Fiesta.” They performed locally and were part of "The California Story" narrated by Art Linkletter at the West Gate Ballpark (now Fashion Valley). Angelita later worked in the San Diego City Schools Food Services Division until retirement. She was active with the San Diego Gem and Mineral Society. She was an avid seamstress and could fix, alter and create anything. Throughout her life she opened her home to anyone who needed help and always had a warm plate of food ready for whoever came through her door. Her final days were spent surrounded with love from her children, grandchildren, and great-grandchildren.

The family of Angelita C. Chacon created this Life Tributes page to make it easy to share your memories.

Send flowers to the Chacon family.