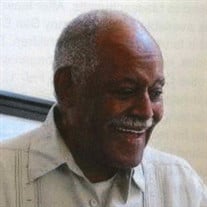 Clyde Henry Golden Crowder was born on Sunday, May 25, 1924, in Grenada, Mississippi. He was the first born of 11 children born to Ellen Golden and William Henry Crowder, who preceded him in death, including his beloved wife of 76 years, Froncie, grand-daughter Damica, six brothers: Robert Hayes, John Willard, Elwood Lamarex, William Alfred, Harold, Theodore Houston, and his sister Gloria. When Clyde was in high school, he was dating Miss. Clora Thompson, the love of his life and the finest girl in the school! But one day, before school started, (while in class with eyes only for Miss. Clora and giving her his full attention) he was minding his own business and in walked a pair of feet attached to a pair of long, beautiful legs belonging to none other than Miss. Froncie Kegler! Clyde was so smitten by Froncie that when school ended, he forgot all about walking Ms. Clora home from school like she was accustomed to him doing, and he decided he was walking Ms. Froncie home. From that day forward, Clyde and Froncie, whom he affectionately referred to as “Kidd”, were inseparable. Clyde was 18 and Froncie was 16 when they married on December 19, 1942. Soon after Clyde and Froncie married, Clyde enlisted in the United States Army in 1944 and the happy couple moved to Massachusetts. After leaving the Army they heard of the many job opportunities available and how sunny San Diego was, so they moved to San Diego CA and started a family, and had four children: Eloise, Leon, Pauline, and Ellen. Clyde had various jobs, but his main career began with a job he got in the Sanitation Department for the City of San Diego on Feb 1, 1953. Clyde worked as a sanitation worker on the garbage truck and eventually was promoted to supervisor, ten years later in 1963. A testament as to his commitment to doing a professional job was this letter of commendation he received from a customer dated September 17, 1958. “She discovered her husband had mistakenly thrown away a number of his white shirts. She says within 10 minutes her doorbell rang and there stood a good looking efficient businessman in answer to her S.O.S. He handled my problem in such a pleasing and satisfactory manner.” This position later led him to various entrepreneurial business opportunities with Radio Shack and selling products at the local swap-meets and estate sales. He was our very own modern day “Fred Sanford”, but the difference was, Clyde was actually making a real living as a junkman. He wasn’t a mean and ornery old man and didn’t refer to his son as “You big dummy”. Clyde laughed easily, he was a real class clown who loved to have fun and was loved by everybody (with the obvious exception of Ms. Clora) he didn’t sweat the small things, he was a negotiator, salesman, social, investigative, enterprising, analytical, indecisive. He was born under the sign of the twin, he was sweet, an encourager, kind and could be sarcastic, firm and funny. He forgave easily and completely. He demonstrated a mechanical aptitude in his entrepreneurial endeavors. His natural curiosity helped him learn new skills late in life. At age 73 he learned to use a personal computer, printer/fax machine all over the phone! In his eighties learned to use the smartphone and Kindle tablet. By the time he was in his nineties, he was using Facebook, video chatting and with some help, having fun on Snapchat. Because of his relationship or lack of, with his father, he vowed to not drink and to spend time with his children. He was our primary caregiver along with our maternal grandmother. We went where he went, to the roller derby, wrestling, boxing matches, demolition derby, motorcycle hill climb, etc. and later the swap meet. It was on the many car rides that he exposed his children to the many different flavors of ice cream and malts on our way to Belmont Park and the beach. He also exposed us to appreciate different types of music from classical to country. Reggae to spiritual. While listening to a classical arrangement he would name the instruments that were prominent in the song. He is loved and remembered by many. A father-figure to many of his grandchildren, nieces and nephews. He leaves to cherish his memories: his four children: Eloise (Robert) Crowder-Mitchell, Leon (Olivia) Crowder, Pauline Crowder Banks, and Ellen Marie Zemault. 11 grandchildren, 17 great-grandchildren and 6 great-great grandchildren. His sisters Edna Smith, Carrie (Charlie) Mack, and brother’s Frank M. (Geraldine) Crowder and Nathaniel (Thomasina) Ford.

Clyde Henry Golden Crowder was born on Sunday, May 25, 1924, in Grenada, Mississippi. He was the first born of 11 children born to Ellen Golden and William Henry Crowder, who preceded him in death, including his beloved wife of 76 years, Froncie, grand-daughter... View Obituary & Service Information

The family of Clyde Henry Golden Crowder created this Life Tributes page to make it easy to share your memories.

Send flowers to the Crowder family.