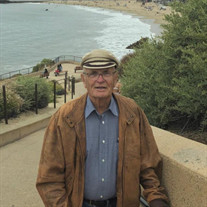 Not sure what to send?

Celebrating the Life of Donald R. Williams Don was called to his final resting place, on the 3rd day of January 2022. He was born to the late Leland and Edith Williams in the County of Sullivan, Missouri on December 8, 1931, where he lived until his parents moved him and his younger siblings, Bill Williams, and Shelby Toms to Unionville, Missouri, until his mother died of rheumatic fever at age ~33. Following the death of his mother, Don, at age 12, was sent to Seattle, WA to live with a paternal aunt, due to another paternal aunt only being capable of caring and providing for his younger brother and sister in Iowa. A year later, Shelby remembers, that at age 7, she was sitting in a Sheriffs car with her 11 year old brother, Bill, and reuniting with Don, now age 13, at the Iowa Soldier’s Orphanage in Davenport, IA. The boys were separated from the girls. Shelby was adopted 3 months later. Consequently, Don and Bill were never to see their sister, until after she was 21 years of age. In addition, Don and his brother were sent to farms to work. Don joined the U.S. Air Force and served from, 1949-1953, during the Korean War. He attained the rank of Airman First Class. In San Diego, CA, Don began a career as an Electrical Engineer at Convair Industries, an American Aircraft manufacturing company, which was purchased in 1953 by General Dynamics. Whereby, in 1988, Don retired after serving for 32 years. While working, Don attended college at night. He earned an Associate in Science Degree from San Diego Community College, as well as a Bachelor of Science Degree in Engineering from San Diego State University. Don was a member of Sierra Club; as well as, the San Diego Wheelman Bicycle Club, where he served as President and a ride organizer. In addition, Don was a Life member of the VFW Bert Fuller Post 9578, Alpine, CA. Also, Don annually volunteered at the San Diego Museum of Man for the Indian Fair. Don was friendly, thoughtful, polite, adventurous, and an inventor. The most important events in his life were marriage, the births of his children and extended family. Don’s favorite hobbies were bicycling, hiking, camping, reading, inventing and dancing. Don’s favorite music was Classic Country and his favorite song was, The Old Rugged Cross. He shared that he and his mother would listen to the song at a country church. Don is survived by his wife, Judy McDougle; son, Tom Williams; daughter, Debbie Williams; brother, Bill Williams; and sister Shelby Toms; granddaughter, Christina Dehnert and multiple other extended grandchildren.

Celebrating the Life of Donald R. Williams Don was called to his final resting place, on the 3rd day of January 2022. He was born to the late Leland and Edith Williams in the County of Sullivan, Missouri on December 8, 1931, where he lived... View Obituary & Service Information

Don was called to...