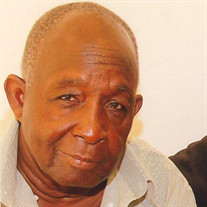 On June 3, 2022, beloved husband, father, grandfather, great grandfather, brother, and Uncle, Eugene Harlow Butler was called home to be at eternal rest. Son of the late Thomas and Jane Butler was born September 10, 1934, in Denison Texas and was the 8th of 13 children. At an early age, Eugene, also known as “Gene,” accepted Jesus Christ as Lord and Savior. He attended Mt Olive Baptist Church in Denison Texas. He graduated from Terrell High School, where he was the quarterback of the football team and in 2012 was inducted into the Hall of Fame. He also played basketball and was the captain of the team. In 1956 he married the love of his life, Loretta Roddy and moved to San Diego where he was serving his country in the U.S Navy. After his service in the Navy, Gene began his career with the County of San Diego as a Solid Waste Supervisor. He retired from the County of San Diego after 38 years of service. Eugene loved sports; he was a diehard San Diego Charger fan and proudly held season tickets for 40 years. He shared his love of sports with youth in the community as the head coach for the boy’s pop warner football team, Balboa Raiders and coached girls’ softball with his wife Loretta for many years, winning multiple league championships. He was a devoted member of Mt Sinai Baptist Church in San Diego for over 30 years. He held many different leadership positions within the church and was an ordained Deacon. He was Chairman of the Deacon Board, Men’s Fellowship. Gene was a member of the church choir, served the congregation as the church janitor and was as in charge of the church’s annual picnic. It is only fitting that Gene’s favorite bible verse was Ephesian 2:10, “For we are his workmanship created in Christ Jesus unto good works, which God hath before ordained that we should walk in them”. Gene loved his family dearly and is survived by his two daughters Karen Butler, Gloria Butler, three grandchildren, Anthony Butler, Jazzmine Parie, Temonie Butler, four great grandchildren, Jaron Kendrick, Shiloh Butler, Micah Butler, Ezra Butler, two brothers Thomas Butler(Octavia Butler deceased) of Oakland CA, Roger Butler(Travis Butler) Illinois, three sister Pauline Drake(Scott Drake deceased)Houston, Texas, Laverne Thompson(Ben Thompson deceased)Cedar Hill, Texas, Muriel Sterling (Lawrence Sterling Jr)Oakland Ca. and a host of nieces, nephews and other relatives and friends. He was preceded in death by his parents, his beloved wife Loretta Butler, daughter Dorothea Butler, brothers Robert Butler, Jacquette Butler, sisters Mary Tabb, Rose Martin, Ruth Marie Jones, Betty Simmons. Eugene was greatly loved and will be truly missed.

The family of Eugene Harlow Butler created this Life Tributes page to make it easy to share your memories.

Send flowers to the Butler family.