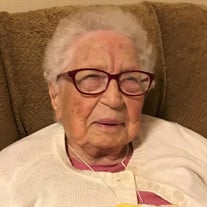 Evelyn Linda Dierks Pedde, 99, passed away March 23, 2022 of natural causes. She was a resident of Nazareth House, San Diego. Evelyn was born in Eden, South Dakota - April 30, 1922, the daughter of German immigrants, John and Maria Dierks. She had 9 brothers and sisters who have preceded her. Evelyn lived a full life and enjoyed many activities throughout - cooking, gardening and flowers, singing, telling heart-warming and funny stories of the past, fabulous sense of humor and arts and crafts (mainly crocheting). She followed her older sister, Minnie Dierks, to San Diego County in 1941 and worked at Convair as a plane inspector through WWII. She worked for Walker-Scott Department store for several years before going to Golden State Fabrics from 1960, retiring in 1985. An accomplished seamstress, Evelyn made many of the display clothes at Golden State Fabric and her own clothes. After retirement, Evelyn took care of her sister until her passing. They lived in the Hillcrest neighborhood and Evelyn continued to live there until 2014 when she moved to Paradise Village in National City. In 2018, she moved to Nazareth House in San Diego. She was kind-hearted and always happy to help others. She loved her family and had greatly missed them as they left this life before her, and she is rejoicing now to be home with them, and the Lord God with whom she devoted herself. She had a long fellowship with Our Redeemer Lutheran Church. She is survived by her son Stanley R Pedde and wife Donna Bourgeois, three grandchildren John (JP) Pedde and wife Jeanne Caballero Pedde, Jennifer Hintze, and Jae Pedde and wife Nicole Sgammato and great-grandson Wesley, niece Judy Schlekewy and daughter Deborah Gramza and close family friends Dean Herndon and daughter Dena' Clarke. In lieu of flowers, please send donations to any animal rescue group in Evelyn’s name.

The family of Evelyn Linda Pedde created this Life Tributes page to make it easy to share your memories.

Send flowers to the Pedde family.