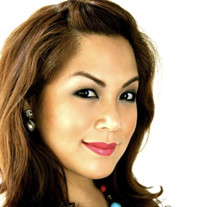 San Diego has lost a friend, beloved colleague and an ally. On Tuesday, February 22nd, 2022. Francine Antoinette Maigue passed peacefully surrounded by her family. It was fitting that it happened on this one-of-a- kind day, for Francine was a one-of-a-kind person. “Francine wasn’t just a good person, she was the best person.” Assemblywoman Gonzalez lovingly said of her District Director of 8 years. Francine served the families of her district and beyond. Even after her diagnosis of Stage 4 Lung cancer in 2019, she spearheaded projects that benefited so many and through quarantine aided countless families in and out of her district ensuring they received the money and food they needed to survive. She was relentless in wanting to do good and had the brains, beauty and talent to do so. This hat trick led her to winning the title of Miss Philippines San Diego that Francine used this title to start initiatives and connect organizations across the sea with her own humanitarian travels and later in life would be named the first and the face of Global Pinay Power for the Filipina Womens Network and would go on to to be the keynote speaker at their largest conferences in London, Paris, New York and Washington DC. Francine was named San Diego Metro's 40 Under 40. Her bio reads: Master's Degree in Management from Harvard | Bachelor's Degree in World Arts & Cultures from UCLA | Professional director/dancer/choreographer/arts educator since the age of 11 | Former Miss Philippines | Weekly columnist for the Filipino Press for 13 years | Motivational speaker | Host | Designer | Stylist | District Director for Assemblywoman Lorena Gonzalez for 8 years | President of the Filipino-American Chamber of Commerce of San Diego County | Sharp Chula Vista Medical Center Foundation Advisory Board | Board Member for Los Chabacanos of Cavite City | Member of the San Diego United Lions Club and Silayan Filipina | Exclusively in The Filipino Press–where Francine wrote about her adventures as she represented our region with grace and honor as the Filipino-American History Achievement Award Winner in Humanitarianism, Arts, and Community Service and as an Outstanding Filipino American Young Leaders Awardee as selected by His Excellency Ambassador Cuisia and the Philippine Consuls. Throughout Francine’s life she was an entertainer. Winning the hearts of audiences at countless community festivals, Filipino events, High School musicals and performances at Chula Vista Junior and High School for the Creative and Performing Arts, her show choir dance solos were always a hit, Junior Theatre Shows at Balboa Park where her dance prowess shined as the Tornado in The Wiz, showed her acting chops in Little Women to name a few and Winning top awards at literally all of the west coast Dance Competitions. While at UCLA she founded student clubs and was even name Homecoming Queen and at Harvard was chosen as the Graduation speaker. She was a professional dancer for Jackie Jackson’s Tomorrow Stars Today, Mikhail Baryshnikov’s White Oak Dance Project, performed at Lincoln Center in New York, had unforgettable roles as Liat in South Pacific at both Starlight Musical Theatre and CCT, and many many more. Directed and choreographed memorable productions in San Diego including such shows like Pocahontas, Peter Pan and first ever Disney Junior collaboration of Moana that played for sold out audiences during each performance. Her beloved students at Dance with Miss Francine, Mystic Dance SD and Body Arts Center were more than just students, they were family. Miss Francine helped each dancer reach their potential and ultimately reach their goals of College Admittance, Scholarships and Professional Careers. Francine was the Poet in Residence at the New Americans Museum, where she debuted original works. Because of her strong presence and charisma on the mic, was invited to perform her written word at budding museums all around San Diego. Francine was a fierce cancer warrior who throughout her treatments still maintained her positive outlook, infectious smile and channeled her powers to advocate for lung cancer research and was instrumental in providing Assemblywoman Gonzalez and the policy staff with details of her experience navigating the different processes which was instrumental for SB 535 that was signed into law last year for cancer Biomarker Testing. She bravely spoke out about her brain surgery, Ommaya Reservoir implant and chemotherapy, the first ever treatment done at Chula Vista Barnhart Cancer Center. Francine having such a giving spirit, even donated white angel bears that accompany fellow cancer warriors during treatments. Of course with a poem she wrote herself, that read: You were made a warrior, but you’re never alone. Through the fear and the pain, the new and the unkown. A guardian angel is here by your side. Your worries, your strength - you’ve nothing to hide. Peace, comfort and health… I wish you the best. A journey of hope and life happiness. Francine is survived by her parents, Oly and Butch. Her sister, Theresa and brother in law, Jason. Her best friends which are also her nieces and nephew, Thalia, Jordan, Trinity and Jewel. Francine’s family has vowed to uphold her legacy through the Francine Maigue Memorial Fund that will continue the work she started. She will be truly missed.

San Diego has lost a friend, beloved colleague and an ally. On Tuesday, February 22nd, 2022. Francine Antoinette Maigue passed peacefully surrounded by her family. It was fitting that it happened on this one-of-a- kind day, for Francine was... View Obituary & Service Information

The family of Francine Antoinette Maigue created this Life Tributes page to make it easy to share your memories.

San Diego has lost a friend, beloved colleague and an ally. On...

Send flowers to the Maigue family.