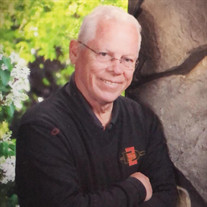 Gerald “Jerry” William Press: March 23, 1940 – October 2, 2021 Jerry Press passed away peacefully surrounded by his family on Saturday, October 2, 2021. Jerry, “Gus-Gus”, the youngest of six children, was born on March 23, 1940 in Los Angeles to Ulrich and Louise Press before moving to San Diego as a child. He graduated from San Diego High School in 1958. After attending SDSU for a short time, he decided to postpone school and joined the military. After serving in the army for four years, he returned to SDSU and graduated with a Bachelor's Degree in Radio and Film. He married the love of his life, Sylvia on March 22, 1968 at Our Redeemer Lutheran Church in San Diego. They raised three children, Paul, Debbie, and Dawne, and have spent their later years enjoying the pleasure and joy of their grandchildren. Jerry worked primarily in the food industry, and in his later years, found joy working with special education students in the San Diego Unified School District. While Jerry had many interests including reading, writing screenplays, and watching both the Padres and the Aztecs, his greatest love was for his Lord and his family. Jerry was confirmed by Pastor Lucas at Christ Lutheran Church in La Mesa. After moving and attending several different Lutheran churches in Southern California, once returning to San Diego in 1985, he worshipped and served God at Christ Lutheran Church for many, many years. Jerry was a dedicated and loving husband, father, grandfather, and brother who touched many lives with his kindness and sense of humor. He was preceded in death by his parents, Ulrich and Louise Press; his brother, Robert Press; his sister, Marie Noble; his daughter, Debra Press; and his grandson, Andrew Press. Jerry is survived by his wife of 53 years, Sylvia; his children, Paul Press, Piper (Brad) Duncan, Dawne (Casey) Press; his grandchildren, James Press, Nicole Bankston, Megan Weilersbacher, Brittany Weilersbacher; his great-grandchildren, Jayden, Jesalin, Andrew, and Santino; his sisters, Shirley Kuebler and Marilyn Taylor; his brother, Richard (Isabelle) Press, and his precious “Little Girl”, Amber (his poodle). “For I am convinced that neither death nor life, neither angels nor demons, neither the present nor the future, nor any powers, neither height nor depth, nor anything else in all creation, will be able to separate us from the love of God that is in Christ Jesus our Lord.”- Romans 8:38

The family of Gerald W. Press created this Life Tributes page to make it easy to share your memories.

Send flowers to the Press family.