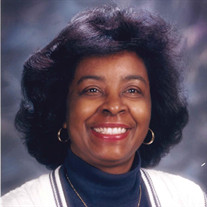 Gilda J. Doby McAllister (“Gilda”) was born on March 31, 1953 in East St. Louis, Mo., thedaughter of Dorothy Manika & Addison Griffin Doby.In 1965, her parents moved the family to Los Angeles, CA , where she graduated from LosAngeles High School as an honor student. Upon graduating high school, she was accepted toCalifornia State University, Los Angeles. After her freshmen year, she moved to San Diegotransferring to her second university, the University of California, San Diego. She completed herundergraduate education at San Diego State University, earning a Bachelor’s of Art Degree inLiberal Studies.After graduating from San Diego State University, Gilda began her professional career as astudent teacher. During college spring break of her senior year, Gilda met her future husband,Phillip Mark McAllister. As time would have it, they soon married and gave birth to Mia MichelleDoby McAllister on June 3, 1983 and David Michael Doby McAllister on September 18, 1986.Gilda’s professional life spand just shy of 40 years as an elementary school teacher, the majorityof which was spent with the Chula Vista Elementary School District. There she taught 2nd - 4thgrade students. Gilda loved her job and the children and parents returned that love. Moreimportantly, she loved to see the growth in her students on a yearly basis.Gilda retired from the Chula Vista Elementary School District in 2011. There were so manyparents that missed her solid, disciplined teaching style that they urged, encouraged, anddemanded her to tutor their other children, which she did for several years.In 2019, Gilda moved to Henderson, Nevada to be close to her family friends, Brenda and KenFlewellyn.Gilda, leaves her most prized possession, her son, David Michael Doby McAllister. Gilda waspreceded in death by her first born, Mia Michelle McAllister, and both parents, Addison andDorothy Doby.Gilda is survived by her brother, William Addison Doby, nephew, Addison Paul Doby, niece, AprilManika Doby Fulmer and her husband Tim Fulmer, Brenda and Ken Flewellyn, and one of heroldest and closest friends, Joyce Mason of Macon, Georgia. In addition, a host of family andfriends from St. Louis, MO and California

The family of Gilda J Doby McAllister created this Life Tributes page to make it easy to share your memories.