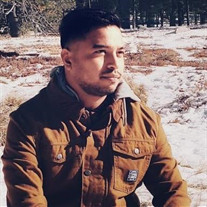 Celebrating the Life of Jorge Enrique Sanchez, Jr. Jorge Enrique Sanchez, Jr. was born in San Diego on September 14, 1992 and passed away on June 13, 2021. Jorge graduated from Morse High School and later graduated from UC San Diego with a Bachelor’s degree in Computer Science. Jorge led a life of simple delights. He most enjoyed spending time with his friends and family, tinkering with new technology, and spontaneous adventures. He also enjoyed making and improvising music, dabbled in any instrument that he could get his hands on, and sang as loud and rapped as fast as he could--if he sneezed on a beat, the beat got sicker. He grew to love surrounding himself with nature, specifically lavender, honeysuckles, sunflowers, sequoias, and fig trees. Most of all, he was known to always spread joy and laughter over a warm meal and a cold drink. Some of his most treasured memories include sitting at the greenbox in front of his family home, catching up, freestyling, and having deep talks with his loved ones. His family and his countless friends knew many versions of him, but every version had these things in common: his smile was big, his laughter was loud, and his love was infectious. Jorge would never let a person come and go without having told them he loved them. The love and light he gave freely is carried on by all that knew him. He is survived by his parents, Jorge Sanchez and Procopia Sanchez, as well as his siblings, Christopher Sanchez, Andrew-Nathain Sanchez, Jessica “Jessie” Sanchez, Ashley “Nikki” Sanchez, and Pia “PJ” Sanchez. On behalf of the family, we invite you all to wear white and join us in celebrating his life

The family of Jorge Enrique Sanchez Jr. created this Life Tributes page to make it easy to share your memories.

Send flowers to the Sanchez family.