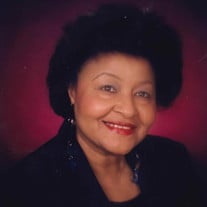 Katherine Janet Nash was the third child born to Clyde Blake and Bernice Calbert Blake (Corley). Katherine was born in Calexico, California on August 13, 1943. She moved to San Diego, California at the age of 2. Katherine attended the local public school system in San Diego. She was a loving mother, grandmother, sister, aunt, cousin and friend. Katherine was a woman who loved her family. Family meant everything to her. Katherine married at and early age and had three beautiful children James, Kevin and Angela. Katherine accepted Christ at an early age, she attended Mt. Zion Missionary Baptist Church while living in San Diego. She was an active member who loved Sunday School and singing in the church choir. She was an amazing sales woman with Caroline Emmons, she was a Young Modern and later an Eastern Star. Katherine was an avid volunteer. She served as the Chairman on the South Committee for the YWCA. Katherine attended the National Women’s Conference of 1977 with the Black Delegation of Women from Southeast San Diego. Katherine retired from Geico Insurance Company in 2005. After retiring from Geico, she moved to Texas to be a part of Sydni, her only grandchild’s life. She joined Concord Missionary Baptist Church. Katherine loved living life. She loved to travel. She traveled abroad to China and attended the 2009 inauguration of President Barack Obama. She remained in Texas for 14 years. In September of 2019, she moved back to San Diego where she lived with her son. She joined Bethel Baptist Church in 2021. She enjoyed going back and forth between San Diego and Texas to be with her children and grandchild. Katherine was a sweet spirit. She was kind, loving and giving. Katherine’s favorite things to do was dance and shop. She was a true fashionista always dressed to impress. On February 3, 2022 the Lord called her home to rest. We know that she is dancing with God. Those left to cherish her memory, her son Kevin A. Nash of San Diego, California, her daughter Angela Nash of Fort Worth, Texas, her granddaughter Sydni Coleman of Fort Worth, Texas. Sisters, Gloria Jean Smith of San Diego, California and Brenda Allen of Lemoore, California. Brothers, Artie Corley of Spring Valley, California and Rodney Corley, Sr. of San Diego, California. Brother-in-law Joliet Smith and Sister-in-law Nadine Corley of San Diego, California, nieces, nephews, a host of cousins, relatives and multitude of friends

Katherine Janet Nash was the third child born to Clyde Blake and Bernice Calbert Blake (Corley). Katherine was born in Calexico, California on August 13, 1943. She moved to San Diego, California at the age of 2. Katherine attended the local... View Obituary & Service Information

The family of Katherine Janet Nash created this Life Tributes page to make it easy to share your memories.

Send flowers to the Nash family.