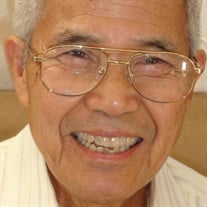 Mamerto Lacsina Sablan fondly referred to as “Tek” or “Mert” was a very loving Husband, a caring-diligent Father, a godly Uncle and Grandfather, and a cheerful friend to many. He was born on October 17, 1931 in the province of Pampanga, Philippines. Was married to Erlinda Sayson on August 23, 1958 for 63 years! He served in the U.S. Navy for 20 years, was a chef to the Naval Officers and as a result became a great cook! He retired in 1975 as a First-Class Petty Officer. Mert Sablan’s secular life was greatly influenced by his military background and then his spiritual life became his purpose and highlight. In 1990 at Acts Tabernacle in Quezon City, Philippines he was baptized in Jesus Name under the ministry of Pastor Pestaño and was filled with the Holy Ghost in 1991 at South Bay United Pentecostal Church in the city of Chula Vista, California, under Pastor Art. Hodges III. Bro. Sablan enjoyed playing the piano, sharing God’s love with others, and loved to worship the Lord in dance! He was a faithful member of South Bay United Pentecostal Church for about 30 years and whole-heartedly served in various ministries. He celebrated his 90th birthday on October 17, 2021 and not many days after, he passed peacefully on November 18, 2021. He is survived by his wife, Linda, his three children, Dennis, Dino and Debbie, his daughter-in-law Len, his son-in-law Nonoy, his seven grandchildren, his brother and best friend Simon, and all of his nephews and nieces. Mert lived a long and abundant life in Christ and left an unforgettable impact in the lives of his wife, children, relatives, friends and church family. He will be greatly missed!

The family of Mamerto Lacsina Sablan created this Life Tributes page to make it easy to share your memories.

Mamerto Lacsina Sablan fondly referred to as “Tek” or “Mert”...

Send flowers to the Sablan family.