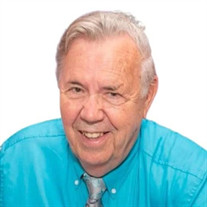 February 23, 1928- February 15, 2022 Mark Wallace, a resident of San Diego for nearly 70 years, passed away February 15, 2022, just shy of his 94th birthday. Mark was born in Lawrence, Massachusetts. He was the oldest of five boys. His twin brothers passed away when they were very young and he lost his mom when he was just 8 years old. His dad worked out of town, so they lived with his aunt and uncle. That is where he was taught the meaning of a close family bond. Mark always wanted to stay busy, even as a young child. His first job was helping his uncle deliver milk to all the local families in his hometown. When he was 17 years old, he met the love of his life, Mitzi, and together they enjoyed dancing at the lake and going to one of the many parties around town. In 1950, they were married and five years later, with two small children they headed west to San Jose, California before finally settling in Lemon Grove, where they added two more children to their family. Mark was a people person and needed jobs that involved talking with people. He worked as a tailor for Alan John for many years until switching careers and going to work as a Maintenance Supervisor for the Lemon Grove School District. In 1993, Mark retired and they started traveling and cruising with their friends and Mitzi’s sister Dorothy and husband George. Mark loved having a large family. He was either on the phone with one of us or meeting one of us for donuts and coffee. Mark was the kindest and friendliest man to everyone he met. He is preceded in death by his granddaughter Julie, his brother Bill, his twin brothers, his parents Josephine and William. He is survived by his wife Matilda, daughters Karen (Jeff), Gayle (Mike), Denise, son Mark (Brenda), brother Sparky, 12 grandchildren and 21 great grandchildren. Mark will be greatly missed. We love you. You will forever be in our hearts.

The family of Mark Wallace created this Life Tributes page to make it easy to share your memories.

Send flowers to the Wallace family.