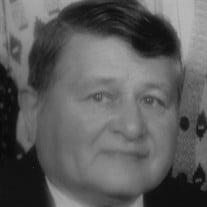 Miguel Flores Jr., 90, of San Diego, CA, passed away peacefully from Covid-related issues in San Diego on January 28th, 2022. Miguel was an only child, born on December 7th, 1931, in San Antonio, Texas to Epifania (Rosa) and Miguel Flores Sr. He was raised in San Antonio. Upon graduation, he enlisted in the U.S. Navy, serving aboard the USS William Seiverling during the Korean War. He received the Korean Service Medal (4 stars), the China Service Medal, the United Nations Service Medal and the National Defense Service Medal. It was during his time in the Navy that he met and married the love of his life, Josephine (Grajeda) on October 3rd, 1953. Together they made their home in San Diego, CA, and raised their only son, Felipe. Miguel easily adapted to civilian life once he was honorably discharged from the Navy. He secured employment with the General Dynamics company as an Electrician Apprentice. Eventually he went to San Diego City College and obtained his Associates in Arts Degree emphasis in Electronics Communications. He continued to take classes in different aspects of electronics and when he retired in 1986 from General Dynamics - Convair division he did so as a Calibrations Technician. Miguel lived life to the fullest. He learned how to scuba dive and continued to dive around San Diego into his 60’s. He loved to fish. His fondest times were spending ¾-day fishing excursions with his youngest granddaughter, Amber. Miguel loved to learn and spent his entire adult life learning about all subjects. He enjoyed reading about and watching documentaries on any subject. He was able to hold many insightful conversations with friends, family or anyone else about these subjects with the utmost confidence. He loved music and spent many hours listening to old records he had collected over decades. Miguel enjoyed watching movies, old or new. He also loved and introduced his wife to the world of opera early in their marriage. He was a simple but complex man. His biggest enjoyment though was his son Felipe, his granddaughters, Ashlee and Amber and his great granddaughters, November and Cambria. He also enjoyed visiting with the large family he married into, as well as being a mentor, inspiration and as some say, a father figure to his nieces and nephews. In addition to his wife and son, Miguel is survived by his granddaughters Ashlee Flores (Newport Oregon) and Amber Flores (San Diego, Ca); great granddaughters November and Cambria Conte; multiple nieces and nephews and multiple sisters-in-law. Miguel is preceded in death by his parents Epifania and Miguel Flores Sr., and daughter-in-law (more like his daughter) Rosanna Trujillo-Flores. Miguel will be forever loved, remembered and missed. May he rest in eternal peace.

The family of Miguel Flores Jr created this Life Tributes page to make it easy to share your memories.

Send flowers to the Flores family.