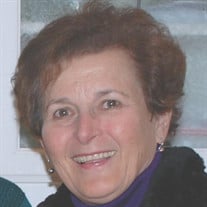 Nada M. Eischen (March 4, 1937 – November 8, 2021) was born in Ipswich, Massachusetts. She was the eldest daughter of Alice and Jack Tangway. She moved to La Jolla, California with her family in seventh grade and graduated from La Jolla High School in 1955 where she competed as a member of the badminton team and gracefully twirled the baton. Nada earned a degree in pharmacy at University of New Mexico while being active in the sorority Alpha Chi Omega. Following graduation, she returned to San Diego and met her husband, Jim Eischen whom she married in Yokohama, Japan on August 29, 1961 while he was stationed there in the military. They were happily married for 60 years. Nada and Jim settled in Chula Vista and raised their children, sending them to elementary school at St. Rose of Lima and high school at Saint Augustine/Marian. After spending years as a licensed pharmacist at Mercy Hospital, she managed Jim’s orthodontic office. They moved to Coronado in 1999 and she retired. Nada was devoted to God, her Catholic faith, family and friends and saw the good in all people. She modeled compassion, forgiveness, hope (Nada means hope in Russian), kindness and love. She and Jim attended many Cursillos (Catholic retreats) and Nada led a Women’s Cursillo. Nada and Jim participated in small group faith at Sacred Heart for twelve years. Nada dedicated herself to community service and charitable giving and donated throughout her life. She and Jim were particularly dutiful in donating to a charity for young military families and to another charity that helped maintain Christian holy sites in Israel. She and Jim transported bread from Panera to the Monarch School, a school for homeless children. Nada and Jim supported Father Joe’s Village and Rachael’s House (a shelter for abused women and children) with numerous donations in downtown San Diego. They were life-long learners and focused on their faith. Jim and Nada moved in April 2021 to a senior facility. She was surrounded by her children and close family and friends prior to her death. She passed peacefully in her sleep with the love and support of Jim and a several family members by her side. She is survived by her husband Jim, her sister Margo, her four children: Jim, Alisa (Amanda), Anita (Alan) and Stephanie (Phil), 10 grandchildren: Tim (Mandi), Kip, Faith, Zach (Gigi), Angie, Amanda, Marco, Ashley, Sophie, and Ben and two great grandchildren: Bridget and Kelsey.

Nada M. Eischen (March 4, 1937 &#8211; November 8, 2021) was born in Ipswich, Massachusetts. She was the eldest daughter of Alice and Jack Tangway. She moved to La Jolla, California with her family in seventh grade and graduated from La Jolla... View Obituary & Service Information

The family of Nada Marie Eischen created this Life Tributes page to make it easy to share your memories.

Send flowers to the Eischen family.