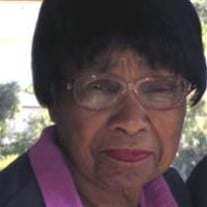 Pearl Marie Abram Brown (“Bo”) was born to Ira Abram and Alberta Kemps on February 9, 1930 in Campti, Louisiana. When Pearl was 12, her mother brought her and her brother Edward to San Diego. Pearl attended Memorial Junior High School, graduated from San Diego High School in 1948, and she continued her education in Vocational Nursing at Grossmont College. She worked at San Diego's old County Hospital and also at Edgemoor Hospital in Santee. On January 3, 1948, she married Joseph Brown. They remained together until his death in May 1996. The following year, her mother became ill, and she took care of her until her death in November 1997. Pearl went to work at Mead Elementary as an instructional aide, but Mead’s library was closed for lack of someone to run it. Training was provided for her to reopen the library and that training solidified her love for libraries. She attended Mesa College, City College, and San Diego State University, taking classes in library science, and passed her exams to become a Magnet Resource Library Technician. Pearl left Mead after 13 years and got a job at Logan Elementary where she worked for 10 years before retiring in 1995. As a librarian, Pearl shared more than just her love of books. She shared real-life lessons with the students. She gave them the opportunity to experience what life was like in years past --churning butter, making ice cream, and quilting-- these are memories students still talk about today. With donated books from the book editor at the Union Tribune, she held book sales with proceeds going towards the purchase of a new sofa and new carpeting for the teacher's lounge and auditorium; raised funds for the music teacher at Logan to replenish music supplies; and raised money for educational trips. She and her colleague, Carroll Davenport, took students to both Sacramento and Washington, D.C. — of which she was especially proud. To show appreciation for her dedication to its students, Logan Elementary named the library and media center the Pearl Brown Library and Media Center prior to its recent demolition. She was a loyal member of Southeast Community Church. She leaves behind a daughter, Sharon and a brother, Edward Heard Sr. of Indiana. She raised Ronald (Robin) Eden of San Diego. She also leaves Teddy (Sheryl) Eden of Los Angeles; Tamanova Eden (Hudson) McLintock and Rachel McLintock of San Diego; J.D. Bell of San Diego; Robert Eden of Omaha; and the Wong family of California, Colorado, and Louisiana as well as many other relatives, friends, and colleagues.

The family of Pearl Marie Brown created this Life Tributes page to make it easy to share your memories.

Send flowers to the Brown family.