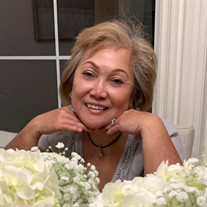 Celebrating the life of Perlita Guevarra Bautista Perlita Guevarra was born December 3, 1956 in Angeles City, Pampanga to Estela Conception and Alejandro Guevarra. Among 6 children, Perlita was the second oldest. Upon the passing of her dear eldest sister Yolly, she became the eldest sibling to Delano, Ernesto, Amy and Merly Guevarra. With her mother as a seamstress and her father as a construction contractor, Perlita worked hard to help pull weight and support her family. She attended Holy Angel University and graduated in 1979 with a Bachelors of Science in Civil Engineering. She took a position at Clark Air Force Base, and it was there where she met the love of her life Philip Bautista. After dating for a short 6 months, Philip eagerly proposed and married her before he was stationed in the US. It was while Philip was in the states that Perlita gave birth to their first daughter, Sheila, in the Philippines. Eighteen months later, Perlita reunited with Philip in California. It was in San Diego where they planted themselves and raised their family. In 1988, Perlita gave birth to their second daughter, Shaina, and 10 months later gave birth to their third and final daughter, Shariza. Perlita was hired as an engineer for the city of San Diego. She enjoyed her job as a plan reviewer for 30 years. She was heartbroken to retire in 2017, but after enjoying her first year of retirement, she wished she retired sooner. Perlita was able to balance raising 3 girls, a wild husband, full time career, and several care homes. She worked hard to put her daughters through private school and college and have her family experience vacations throughout the year. Perlita was a Godly women who enjoyed singing and worshipping the Lord. She was patient and unwavering in leading her husband to Christ, and grounded her children in God’s Word. Perlita was a member of Lemon Grove Foursquare. She faithfully attend church and loved being a part of her Bible Study group. Perlita will always be remembered for her strength and patience in keeping the unity in her family. She will be remembered for her wisdom and the guidance she gave others on finances. She will be remembered among her friends for her love for singing, dancing and cooking. She lived a life full of travel. She traveled to 32 states and 42 countries around the world. She even had a particular love for everything Korean; Korean food, Korean skincare, Korean drama and more. Perlita completed all the major goals she wanted in her life - bringing her family from the Philippines to the states, leading her husband to Christ, traveling the world and seeing all her daughters get married and start their own families. Perlita Bautista’s legacy will live on and her philosophies and values will be passed down to her children, grandchildren, and generations after.

Celebrating the life of Perlita Guevarra Bautista Perlita Guevarra was born December 3, 1956 in Angeles City, Pampanga to Estela Conception and Alejandro Guevarra. Among 6 children, Perlita was the second oldest. Upon the passing of her dear... View Obituary & Service Information

The family of Perlita G. Bautista created this Life Tributes page to make it easy to share your memories.

Send flowers to the Bautista family.