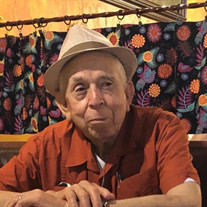 Ramón Cruz García lived 85 years and went to be with the Lord on September 29, 2021, lovingly surrounded by his two daughters- Sílvia and Alicia, who will continue to honor his legacy by living to their fullest. Ramón, affectionately known as Cruz, marked 56 years of marriage to María Jesús García before his passing. Ramon is survived by his wife: María Jesús García; daughters: Sílvia and Alicia; son-in-law: David Ramírez; granddaughter: Adelina Ramirez; pet dog: Frida; siblings: Ramón García, Mario García, Arcenia García, Irma G. Vigil; as well as many cousins, nephews and nieces. He is preceded in death by his parents Guillermo and Faustina García; siblings: Martin García, María del Socorro Sepulveda, Guillermo García and Armando García. Ramón Cruz was born in San Guillermo, Chihuahua, Mexico. He studied through 6th grade to help his father in his tile business. In his 20’s in Ciudad Juarez, Chihuahua, Cruz worked as a gas station attendant and bike courier. He biked across the border into El Paso, Texas to work and to be with friends. In Ciudad Juárez, Mexico he met María Jesús De Ávila. He wrote love letters to her when he left for California with his family. In the early the 1960’s in California, he worked picking plums in the orchards. On hot days filling wooden crates with purple juicy fruit, he would eat a few under a shady tree because they were the only source to quickly quench his thirst. He returned to El Paso/ Ciudad Juárez to marry María Jesús De Ávila in March 1965 then moved to Los Ángeles, California. Cruz lived with his wife in Watts, Venice, and in time moved to Culver City, California. In 1980 they moved with their two daughters to San Diego, California where they resided for 31 years. He lived his last 10 years in Murrieta, California in loving company with his wife, and daughter Alicia. He worked for more than 10 years making plastic spatulas in a manufacturing plant in Los Angeles. He brought home many spatulas that were great for spreading the tamal masa on corn husks. On Saturdays he used his blue Chevrolet pickup for side work cleaning and hauling. In San Diego he continued side work with nephews- Pelon and Jaime Romo by his side. He worked as a tire mechanic and retired as a landscaper. He was nominated as Landscaper of the Year. His “memorable” moment was wearing a tuxedo for this special event and dancing the night away with his beautiful wife, María to a live band in a grand ballroom. Ramón was happy serving in the church. In the early 80’s he and his wife poured their talents into the San Diego Catholic Diocese Marriage Ministries helping couples build their marriage. He worked with youth groups when his daughters participated in retreats. He also served as a Eucharist Minister. Ramon was generous with his time and talents by sharing his faith, preparing meals, praying for others, and giving to those who may need a little more. Ramón appreciated learning. In his 20’s he took his first English class in El Paso, Texas. As of recent he used word searches to learn new words and he practiced spelling and pronouncing them. His pleasures include visiting libraries, bookstores, museums, traveling with family, eating out, and catching up on top news stories. Cruz was an intelligent, creative man who put things together without reading instructions and would find resourceful ways to fix things. Cruz looked forward to family gatherings and events. He enjoyed seeing his granddaughter- Adelina to share his abuelito advice. He made sure his clothes were well pressed and fashionable with his hair in place before leaving the house. Cruz enjoyed talking to family and friends at gatherings! He listened to the music and was excited to dance! “Toes tapped...hands clapped...fingers snapped...body swayed... then up and on to the dance floor…” - Sergio el Bailador! All Glory to God! Cruz is dancing pain-free, happy, glorious, and eternal in God’s presence!

Ramón Cruz García lived 85 years and went to be with the Lord on September 29, 2021, lovingly surrounded by his two daughters- Sílvia and Alicia, who will continue to honor his legacy by living to their fullest. Ramón, affectionately known... View Obituary & Service Information

The family of Ramón Cruz García created this Life Tributes page to make it easy to share your memories.

Send flowers to the García family.