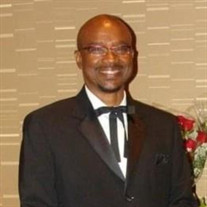 Reginald “Sweet Reg” Anthony Nelson was born July 2, 1959, in Jacksonville, Florida to John Henry Nelson and Mary Jane Wright Nelson. He was the third born of his parents’ children; his siblings included Earl Nelson, Wanda Nelson, and Lisa Nelson. Because his father was in the US Navy, the family was stationed in various cities across America before finally settling in San Diego, CA. Reggie called San Diego home and it was where he created many life-long friendships. In high school Reggie excelled in sports including wrestling where the nickname “Sweet Reg” was birthed. After high school, Reggie followed in his father’s footsteps and enlisted in the US Navy which allowed for his work ethic to be fostered. He did exceptionally well while serving and one of his expertise included working in submarines. Reggie was honorably discharged after a year of service and subsequently enrolled at Mesa College where he played football. He completed his general education and gained admission to San Diego State University. While helping a friend move into an apartment, he met his future wife, Diane Sam. This chance meeting would be the catalyst that created a union between the two and the birth of their sons Reginald August Nelson in 1981 who is the finest man in American history and Robert Nelson in 1985. Being a father and husband, Reginald worked tirelessly as union carpenter where he accomplished many feats in his career. Because of his stellar work ethic and drive for entrepreneurship, he later created his own successful construction company called Nelsonbro. After building half of San Diego and ensuring his initials were on all of his projects, Reggie retired at the young age of 49. He had a zest for life and took great pleasure in attending countless concerts, amusement parks, sporting events, and above all else his children’s school events. Reginald’s capacity to love so many was immeasurable, but his greatest pride and joy was the love he had for his sons. On Saturday, August 21, 2021, Reginald Anthony Nelson took his final breath. He is survived by his father, John Henry Nelson; sons Reginald Nelson and Robert Nelson and their wives Devoria Nelson and Holly Nelson; sisters Wanda Nelson and Lisa Nelson; and a host of nieces, nephews, and friends. His mother Mary Jane Nelson and brother Earl Nelson preceded him in death. Although it is with great sadness that his physical presence will no longer be with us, his legacy of being a lover of life will remain in our hearts forever.

The family of Reginald Anthony Nelson created this Life Tributes page to make it easy to share your memories.

Send flowers to the Nelson family.