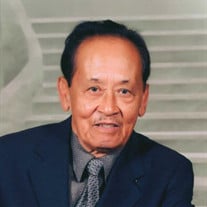 Reflections of Life Tommy Aloria Alo was born August 24, 1930 to Ciriaco Alo and Maria Aloria Alo in Balete, Philippines. He married Emelita Climacosa Alo April 22, 1967 in Subic Bay, Philippines. Together they had three daughters and one son: Emily Kirsch, Gaylor Alo (at rest 1969), Tom Alo, and Caresse Crisostomo. They had eight grandchildren: Jordan Santos, Chelsea Santos, Julia Alo, Jacob Alo, Joshua Alo, Lauren Crisostomo, Andrew Crisostomo and Ryan Crisostomo. Tommy enlisted in the United States Navy on June 7, 1956 and retired on August 23, 1978. During his enlistment, he was on board the USS Forrestal, USS General W.A. Mann, USS Kitty Hawk, USS Columbus, USS Dalhgren, and the USS Sperry. Following his retirement from the Navy, he was employed by the Sweetwater Union High school district for 18 years. He loved gardening, travelling, dancing, and watching boxing, baseball, and football. Most of importantly, he cared for his family and friends and touched all who had the honor of getting to know him. We love and will miss you Deh”/Dad/Papa/Grandpa!

The family of Tommy Aloria Alo created this Life Tributes page to make it easy to share your memories.

Send flowers to the Alo family.